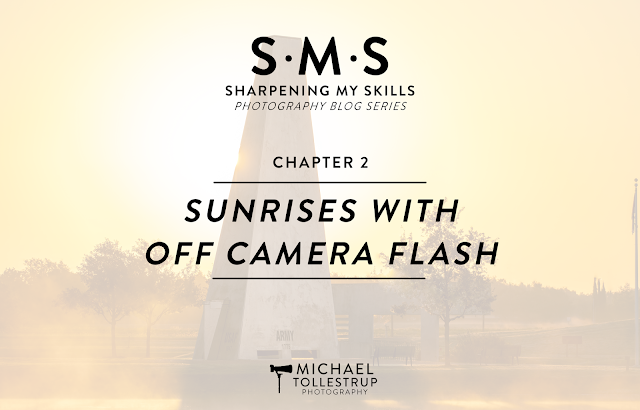 Sunrises with OCF (Off Camera Flash)? What madness! I decided to spice up the usual cliché of sunrise photos with an off camera flash. Chapter 3 of SMS will focus on sunset photography, and will be posted next Tuesday (May 26).

Waking up early is different when you actually want to, when you're motivated. I woke up at 5:00AM just to try and get some good shots. Now I will mention that I had been doing quite a bit of sunset photos, but that's for a later post. I had been used to staying out until after the sun would set to try and get the shot, but waking up was something new. As I mentioned earlier, waking up early is easy, or should I say easier, when you're motivated. For me, I was definitely motivated to try and grab a good set of photos, however I didn't plan anything out much. I spent about 2 hours taking photos at my local park & I would've stayed longer had my flash's battery not died!

The first photo was not the first location I shot chronologically, but it was one of my favorites. You may notice that the "Army" (Right side of the structure) face of the obelisk is illuminated, and that was with the help of my Profoto B1. I stood on the opposite end of a small lake, and had my Profoto A1 set to Air-TTL mode. This was completely new for me, as I had never done this sort of thing. Where I would use a strobe as a source of fill for landscape/ nature photos.


This photo, also one of my favorites, was an experimentation in using a high aperture, and a fill flash from an off camera flash. As mentioned with the first image, I used a Profoto A1 to remotely trigger my Profoto B1. I tried using a higher aperture, however, I was unsuccessful in getting a proper exposure and mixing it with a fill flash. Although, I believe I was successful in using a high aperture to get the "sunburst" effect. This effect is created because the small diameter of the aperture creates a concentrated amount of light, often associated with sharpness.


This next photo wasn't really one that I cared about that much, in the sense that I didn't really plan it out, and it wasn't even using the flash that I had brought, but it was a nice moment I couldn't pass up on. As I was rushing to move from one location to another I had taken this quick snapshot to capture a "thumbnail" of the day's work.

Yes, I know the photo is out of focus, and that's mainly due to the fact that I didn't give my lens enough time to focus. And I kinda like it out of focus, it gives a sense of relief to me as a viewer, knowing I don't have to worry about what the objects in the photo are. It also makes me calmer for some reason.

This last photo I captured was actually a composite of 7 photos I bracketed while hand holding the lens. If you read the caption, you'll see that it was a 200-500mm f/5.6 lens. Yes that's right,I hand-held a 200-500mm lens, bracketed 7 photos, and used an off camera strobe as a fill light. Yes, I'm crazy, or at least somewhat crazy. That might be part of the reason why the photo turned out like something from out of this world. I brought the raw files into Lightroom, and proceeded to start an HDR photo merge project.

What came next, specifically the preview and then the final composite, was quite a shock. So much so that I decided to keep the photo. The odd colors are probably Lightroom attempting to merge the different color temperatures of the raw files, and I'm going to post an addendum to this post with more experimentation on this HDR project.

I've only done just a few experiments with sunrise photos, and a fill flash, and I definitely want to try and get better pictures. Maybe not even better photos, but just more experiments. There's a lot more that I can do, and I know where and when I need to take the kinds of photos I want. I just have to remember to charge my flash's batteries! More experiments aren't just fun, but they are important trial and error process that can help me sharpen my skills.