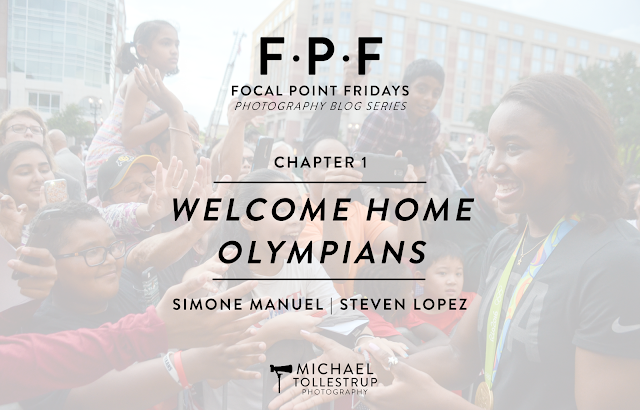 Welcome, Welcome, Welcome. Years ago (yes actually years ago), I was an event event photographer for the City of Sugar Land, in Texas. In the summer of 2016, a little known event you may or may not have heard of, The Summer Olympics® took place. Team USA performed fantastically, with Katie Ledecky, Michael Phelps and Simone Biles headlining the news.

Along with Ledecky, Phelps and Biles, first time Olympic® contender Simone Manuel made headlines when she became the first African American woman to win gold in an individual swimming event. She also won a silver and gold in two other events. Simone Manuel is from Sugar Land, and graduated from Stanford University, and from Fort Bend Austin High School.


Steven López, on the other hand, was not a first time Olympic® contender at Rio. Lopez performed at at five Olympic® Games, and was also in attendance at the Welcome Home Celebration.


The above photo was taken after the ceremony concluded & when both athletes were greeting the crowd of eager fans. Unfortunately with this photo, I recognize that the settings weren't adequate, and Simone Manuel (the primary subject) was not properly exposed. Oh well. I think that the expression on everyone's faces was much more important to capture.

How did I get this gig? It took a while, actually. I submitted a photo I took at at local park (Sugar Land's Memorial Park), to the city's yearly calendar contest. My photo got accepted & It wound up in the December issue of the calendar. Along with the chose calendar submission, I asked if I could take some photos at an open house for a new performing arts center. I shot the opening & shortly after I was asked to take photos for the city at the Welcome Home Event.

The photo of the park was not one of my best photos I've ever taken, but I still enjoy looking at it. I've still returned to the park to take photos of the sunset, but I haven't gotten it quite right. Anyhow, I still appreciate the opportunities this photo created. If I didn't send this photo into the contest, I may never have been considered for as an event photographer.

Back to the event, before the honorees greeted the crowd, they were paraded to the main street in front of City Hall at Town Center. After, they careened through the crowd to arrive at the steps of city hall, where the ceremony began.

City Mayor Joe Zimmerman gave the opening remarks and also congratulated both athetles on their success. The athletes both spoke afterwards and were presented with flowers before they spoke. Along with the athletes, City Manager Allen Bogard and Fort Bend ISD Superintendent Charles Dupree spoke at the ceremony.

“This experience will, by far, be one of the greatest memories for our family,” said Sharron Manuel. “Nothing has ever come close to what we’re feeling right now.” (Fort Bend Lifestyles & Homes)

After the ceremony, the crowd greeting and lots of photos, both athletes went inside city hall to gather for some posed shots with the city council, school board & even some lucky fans.

I had so much fun taking pictures at this event & it really sparked my excitement and passion for event photography. It was very hectic & I was very nervous as I was just starting out, and I needed to make sure everything went right. Many of the photos I took at the event were used by entities from the City of Sugar Land, to NBC Sports. It really opened doors for me as a photographer & I will never forget it.

For any questions, please reach out to me via email: michael@michaeltollestrup.com